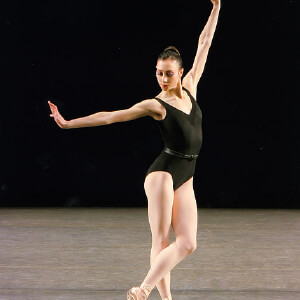 Ellen Bar attended the School of American Ballet for eight years before she was asked to join the New York City Ballet as a corps member in 1998 and promoted to Soloist in 2006.  During her 14-year career with the company, Ellen danced featured roles in works by George Balanchine, Jerome Robbins, Peter Martins and Christopher Wheeldon, among many others.

In 2005, Ellen danced in the stage revival of Jerome Robbins’ NY Export: Opus Jazz, during which she and fellow soloist Sean Suozzi developed the idea to re-imagine the ballet for film, shot on location in present-day New York City. Together, they developed and produced the feature-length 35mm film adaptation NY EXPORT: OPUS JAZZ and the accompanying documentary A BALLET IN SNEAKERS, which premiered at South by Southwest 2010, where it won an Audience Award, and aired on PBS’ Great Performances.

In 2011, Ellen retired from dancing and became the Director of Media Projects for New York City Ballet, where she developed, produced and directed film and video content for the company. Ellen is a member of the Advisory Committee of Dance/NYC, a nonprofit research and advocacy group for the New York dance community, and serves on the Advisory Board of NYU Tisch’s Dance Media program.

In 2014, Ellen produced the feature documentary film BALLET 422, which premiered in competition at Tribeca Film Festival and was released theatrically nationwide by Magnolia Pictures. Ellen is now working as a freelance film producer and as a consultant to nonprofits for video content strategy and development.