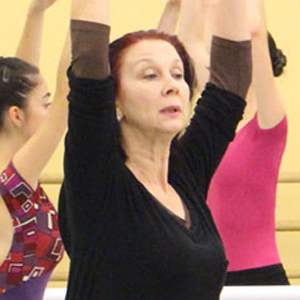 A former dancer with the Odessa Ballet in Ukraine, Ms. Bar is an internationally acclaimed instructor and coach on faculty at the Oregon Ballet Theatre School. Her students have gone on to dance in some of the world’s most renown companies and receive awards in prestigious ballet competitions around the globe! She is also the mother Ellen Bar, the former New York City Ballet soloist who we welcomed to DCC in 2018 for a special Master Class on Jerome Robbins’s NY Export: Opus Jazz!

Natasha Bar was born in Odessa, Ukraine. She was trained in the classical tradition of Odessa State Choreographic Academy and continued her studies with legendary teachers Julius Placht, Elena Tchernishova, and Marina Shamsheva. Natasha went on to dance professionally with the Odessa Ballet Company for 15 years. During her career she worked with world renowned choreographers Leonid Lavrovsky, Oleg Vinogradov, Igor Tchernishov, and Nina Fedorova. As a soloist with the company she performed leading roles in classical and contemporary ballets and toured internationally.

Since she moved to the U.S., Natasha Bar has established a reputation as a well-known teacher, choreographer and coach in both traditional Vaganova and contemporary American styles. Natasha was on the faculty of the Rock School of the Pennsylvania Ballet in Philadelphia for 15 years, both as a teacher and as the official International Competition Coach. While at the Rock School, Natasha coached the winners of international competitions in Moscow, Jackson, Greece, Paris, and the Youth America GrandPrix in New York City.