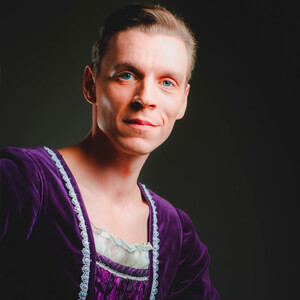 Richard Krusch was born in Budapest, Hungary. He started his ballet training in 1994 at the Hungarian Dance Academy, where he received training in the classical Vaganova technique and classical repertoire. He attended numerous summer programs in the United States, including the UNC-North Carolina School of the Arts and School of American Ballet in New York City. He graduated from UNC-NCSA in the summer of 2002. Richard joined Carolina Ballet in 2002 as Corps de Ballet and was promoted to Principal in 2011. Over the years, Mr. Krusch had worked with the American Ballet Theatre, the Hungarian National Ballet and he has toured with Hungarian Ballet in Europe. He has danced many major roles and many roles were choreographed on him by Robert Weiss and Lynne Taylor-Corbett. In 2011, Mr. Krusch represented Carolina Ballet at the International Ballet Festival of Miami.