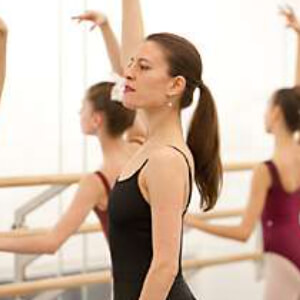 Dena Abergel began ballet classes at the age of 6 with Dorit Koppel at Progressive Dance Studio in Englewood, New Jersey. She attended the School of American Ballet’s 5-week Summer Course at the age of 12 and enrolled as a full-time student in the School’s Intermediate division one year later. In 1989, she joined other advanced students on a trip to Amsterdam’s Holland Festival to perform on a program with Russia’s Vaganova Academy. She also accompanied SAB faculty member Suki Schorer to La Baulle, France, for a student performance of Balanchine’s Valse Fantaisie. At SAB’s June 1990 Workshop performances, she danced featured roles in Stars and Stripes and the pas de deux from Kermesse in Bruges. Peter Martins invited Ms. Abergel to become an apprentice with New York City Ballet in 1990, and she joined the Company as a member of the corps de ballet in 1991.

During 18 years as a member of New York City Ballet, Ms. Abergel performed in numerous works by George Balanchine and Jerome Robbins. She originated roles in Robbins’s West Side Story Suite; in Peter Martins’s Chichester Psalms, Harmonielehre, Symphonic Dances, The Sleeping Beauty, Swan Lake and Romeo+Juliet; and in Christopher Wheeldon’s Carnival of the Animals, Variations Serieuses, and An American in Paris.

Ms. Abergel performed featured and soloist roles in a number of works by George Balanchine, including The Nutcracker®, Firebird, Coppélia, Swan Lake, and A Midsummer Night’s Dream.

Upon retiring from performing in 2009, Ms. Abergel joined SAB’s faculty and became NYCB’s Assistant Children’s Ballet Master. She was named Children’s Ballet Master at New York City Ballet in the fall of 2012. In her position with the Company, Ms. Abergel casts and rehearses children from the School of American Ballet in all NYCB productions featuring roles for children, including George Balanchine’s The Nutcracker®, The Sleeping Beauty, A Midsummer Night’s Dream, Swan Lake and Coppélia.