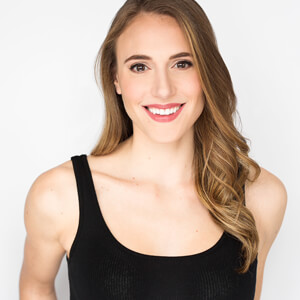 Megan Levinson is currently in her 9th season as a Radio City Rockette. As a Rockette she has had the opportunity to perform on the “71st Annual Tony Awards”, “Macy’s Thanksgiving Day Parade”, “The Today Show”, “Macy’s 4th of July Fireworks”, “Live! With Michael and Kelly” “The Wendy Williams Show”, “The Chew”, “Saks Fifth Ave Window Unveiling”, and the stages of both Radio City Music Hall and The Grand Ole Opry.

Her professional career began at the age 11 as Clara in the Radio City Christmas Spectacular. Megan has studied at School of American Ballet, Miami City Ballet, New Jersey Ballet School, and was asked to be a part of Atlanta Ballet’s Pre-Professional Division. She has had to the opportunity to work with, workshop and perform Mia Michaels choreography. Megan’s other credits include performing in a Jean Paul Gaultier fashion show in Vienna Austria and in a Jodi McQueen Music Video. She has her BA in Psychology from Montclair State University and is pursuing a Masters in Sports Psychology.