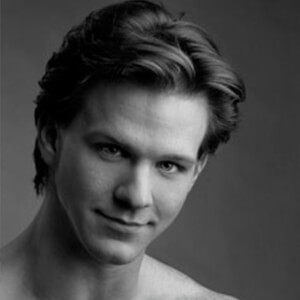 Daniel Ulbricht was born in St. Petersburg, Florida, USA, and began his dance training at the age of 11. At age 16, Mr. Ulbricht was invited by the School of American Ballet (SAB), the official school of New York City Ballet, to continue his training. As a student at SAB, Mr. Ulbricht performed with New York City Ballet as a Jester in Peter Martins’ The Sleeping Beauty. In December 2000, he became an apprentice with New York City Ballet and in November 2001 he joined the Company as a member of the corps de ballet. In January 2005, Mr. Ulbricht was promoted to the rank of soloist and principal dancer in May 2007. During his time there, he has danced featured roles in a number of Balanchine, Robbins, Martins, and Wheeldon ballets including George Balanchine’s Prodigal Son, Tarantella, Stars and Stripes, A Midsummer Night’s Dream, Mozartiana, Nutcracker, Symphony in 3, The Steadfast Tin Soldier:Jerome Robbins’s Fancy Free, Interplay, Suite of Dances, Four Seasons;and Peter Martins’sJeu de Cartes, Hallelujah Junction, Eight More, Swan Lake, Sleeping Beauty, Romeo + Julietamong many others. Mr. Ulbricht has also danced Tarantellaat the 2004 Kennedy Center Honors to celebrate the Balanchine Centenary. He has also performed at a number of national and international festivals and galas.

Mr. Ulbricht is a guest teacher at the School of American Ballet, Ballet Academy East, Alvin Ailey, as well as, teaching at a number of well-known national dance schools, private schools, and universities throughout the United States including Yale, Indiana University and SUNY Purchase. Mr. Ulbricht is currently the Artistic Advisor of Manhattan Youth Ballet. Mr. Ulbricht is also the Artistic Director of New York State Summer School for the Arts in Saratoga Springs, NY.