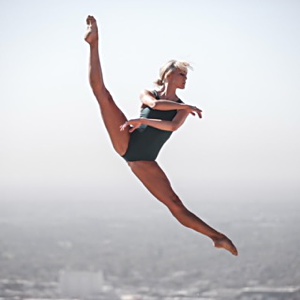 Dusty Button grew up in South Carolina, and was a talented gymnast and dancer from a young age. She dabbled in all types of dance, but it was ballet that drew her in. “I love the discipline and the willingness to accept criticism and judgment yet the resilience to grow from it rather than implode,” Dusty says. She soon began competing in dance competitions and getting cast in major productions.

She moved to New York City at age 15 to train at the American Ballet Theatre. At 17, she relocated to London for a scholarship at the Royal Ballet School, and in 2012, at age 23, she moved back to the US to join the Boston Ballet, where she was promoted from corps de ballet to principal dancer in just two years. She left her company role as principal ballerina in 2017, looking to make her own mark on the ballet industry as teacher, choreographer, artist, and designer of her own leotard line. Pointe Magazine once called Dusty a “new brand of ballerina” as she continues to shatter the mould of what a modern ballerina is capable of. © Red Bull Media House. Picture by @Button_Built